"In the age of the railroad, the Chesapeake Bay was the domain of steamboats," Nolan writes of Wilmot Landing, an old steamboat wharf. This is familiar territory and the author has done a wonderful job of describing it, while including all the practical information and maps necessary to plan such an outing. . .There are certainly a great many future trip possibilities for this reader of Nolan's book. I was especially interested in her forays into lowland marshes near the Great Dismal Swamp in southeastern Virginia and in her helpful information about trips on Eastern Shore rivers such as the Blackwater in Maryland-Virginia."


From the book jacket:

Route descriptions take you beyond access points and paddling notes to include estuarine ecology, social and natural history; and sidebars cover a variety of topics from gear to wildlife sightings to local highlights. Kayakers of all levels, from greenhorns to old salts, will appreciate the depth of information, including geographical, wind, weather, tidal, and safety issues. A brief introduction to other area trips effectively doubles the number of trip locations to pursue.

Virginia is a state of intimate natural diversity. The coastal plain flows east from the fall line and hundreds of rivers, creeks and bays sprawl over the rolling flat land. From the freshwater marshes of the upper tidal Potomac and Rappahannock, to the Chesapeake salt water marshes of Mathews County, to the dark cypress swamps of southeastern Virginia, to the ocean salty coastal bays of the barrier islands, all of these environments are united in one state – Virginia.

These trips, this book, represent one year of paddling. I kayaked Virginia from winter to autumn, and saw the state in all its shades of beauty. I was repeatedly amazed by its diversity and within one-week-long trip would paddle in coastal Atlantic bays, cypress swamps, on the salty Chesapeake, and along miles of freshwater marshes, without traveling more than 60 miles. I fell in love while writing this book. I fell in love with Virginia’s slow rivers, its thick accents, its hard-working people, its friendly fishermen, its fragrant forests, its dense marshes, its clear blue bay waters and its ancient swamps. I left each waterway with reluctance, never believing that I would find anything that would match it in beauty. But then, after I departed the delicate beauty of a freshwater marsh, I would be stunned by the majestic strangeness of a cypress wilderness, and my perspectives and notions about what is beautiful were transformed.

These 30 trips represent hundreds of waterways. Some I selected for their wilderness, and others, like Georgetown, for their civilization. Some are small, winding waterways engulfed in marsh, while others are open bay paddles along miles of beach. The rivers of the Old Dominion are steeped in human history, whether it is the 12,000-year-old civilization that still lives along the banks of the Pamunkey, or the more recent colonial history that is memorialized on Popes Creek, at the birthplace of President George Washington. Some places, like Lake Drummond, I selected for their uniqueness while others, like Urbanna, were selected because they represent dozens of similar waterways. These 30 trips are a sampling. They present beautiful places, and demonstrate a way to see them. My aim is to present a departure point for exploration, of not only these creeks and bays, but of all of Virginia. 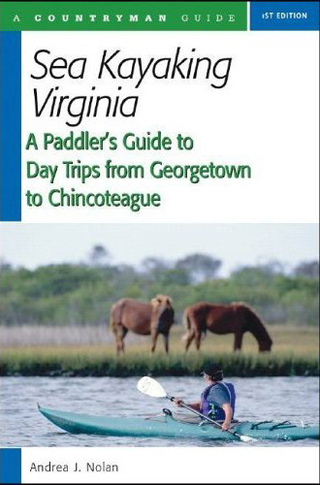